“Secretos” comes from Chants Sephardis (World Sephardi Federation, 1958), an invaluable collection published by Romanian-born musician and composer Leon Algazi. Frustratingly, he does not cite his sources or informants, but he did his collecting among immigrant Sephardic Jews in the late 1940s and early 1950s in Paris, where he lived and worked for most of his career. “Avre Tu Puerta Cerrada” is in the first volume of Levy’s collection, the only one that does not tell us where he found the songs, but it’s almost certainly Balkan. Tina and Howard first learned and recorded these songs in the 1990s, when they were members of La Rondinella, a DC-based Sephardic and early music ensemble. 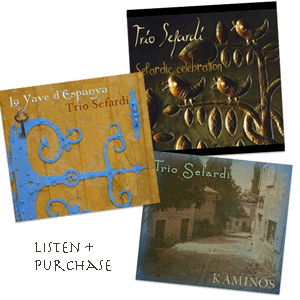