Morenika a Mi Me Yaman

I am called the brunette (dark one),
But I was born fair
And it is the summer sun
That made me thus.

Brunette, you are graceful,
You are dark and I am a fool,
And your eyes are dark.

They call me the brunette, The sailors.
If they call me again I will go with them.

He calls me the brunette, The king’s son.
If he calls me again I will go with him.

Songs about “dark-skinned” women are common in Sephardic repertoire and in cancioneros (songbooks) from the Spanish Renaissance. There is an implicit (or sometimes explicit) sense that such women are of lesser status or perhaps somewhat deficient in moral character. Clearly this relates to the belief in Western cultures that people with lighter skin are superior to their darker skinned brethren; this is a subject that is way too deep and broad for these brief notes, and not one I am qualified to address in more detail. Suffice it to say that there are many versions of this song, both in text and in melody, found in the Sephardic repertoire, and a great many recorded versions, including one by Isaac Azose. 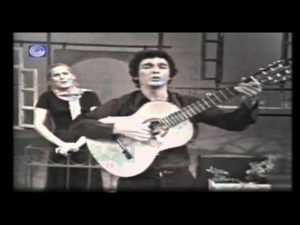 The chorus of this version of “Morenika” is a variation on a theme introduced in one of our favorite songs from Flory Jagoda’s repertoire, “Yo hanino, tu hanina,” in which the suitor says, “I am handsome, you are beautiful, let’s get married and have children like the sun and the moon” (on Trio Sefardi’s first CD, “Sefardic Celebration”). Another fact of interest regarding this song is that Itzhak Navon, president of Israel from 1978 to 1983, wrote a version in Hebrew for a musical called “Bustan Sephardi” (The Sephardic Garden) that became quite popular in Israel, so the tune is well-known to Israelis.

Source: For a printed version: Levy, Chants Judeo-Espagnols (see #3 above)