Ladino, The Language of Sephardic Jews 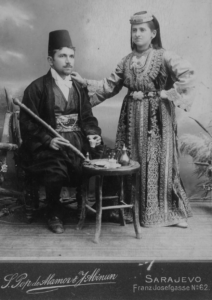 Deprived of their material goods, the treasure the Sephardim carried to their new homes was in their language, which came to be known as Ladino or Judeo-Español. The term “Ladino” stems from a method used by Spanish rabbis to translate biblical texts from Hebrew into Spanish, using Hebrew syntactical rules. Ladino was, at first, a written language, and the term appears to have been applied to spoken language only post-exile.

In exile, the Sephardim clung fiercely to the language of the country that had rejected them, although in new lands Ladino was often mixed with the local dialects. Hebrew words also appear with some frequency. Ladino became, for the Sephardim, what Yiddish is for the Ashkenazim, the Jews of Eastern Europe: an adopted language in lands where the Jews would later endure bitter oppression. Both languages, incidentally, use Hebrew characters (known as Rashi) in their written versions.

Over time, the exiled Sephardim and their culture supplanted pre-existing Jewish cultures in some places where they settled. In Greece and Turkey, for example, a thriving, existing Jewish community known as Romaniot was gradually subsumed by the large number of Spanish Jews who arrived there in the 16th century. Although a shift to the religious practices of the Sephardim was a part of this phenomenon, the Sephardic cultural domination is most obvious through language and its attendant oral traditions. Rather than adopting the languages of their new homes, the Sephardim continued to speak Spanish. Over time, the language changed with the accretion of local terms and Hebrew words; however, linguistic scholars find in Ladino a direct, almost pure expression of Medieval Spanish.